Are you thinking about going on a very low calorie diet (VLCD)?

If so, it’s probably because you understand that the one big secret to weight loss is eating fewer calories.

Because once you understand that you need to eat less in order to lose weight, it’s common to then think “If I eat a lot less, I’ll lose weight a lot faster!”

And how do you eat a lot less? Simple. By following a very low calorie diet.

What Is A Very Low Calorie Diet?

“Official” definitions put it at any diet that is 800 calories a day or less. If you look around, though, you’ll see it defined as anything between 500 – 1000 calories a day.

But honestly? I don’t really care about any of that. In the context of this article, I’m going to define VLCDs like this…

A very low calorie diet is any diet where a person is eating significantly less than the amount of calories they’d truly need to eat a day in order to lose weight at an optimal, sustainable and healthy rate. A more accurate term would probably be an unnecessarily low calorie diet.

Now what does that mean, you ask? It means deficit size matters.

The Size Of Your Deficit Matters

You see, weight loss happens when you eat fewer calories than the amount your body requires to maintain its current weight. This is a state known as a caloric deficit.

The thing is, that deficit can be a variety of sizes.

Let me give you an example.

Let’s pretend some example person maintains their current weight eating 2500 calories a day. In order for a deficit to exist, they’d need to eat some degree less than 2500.

That means our example person could potentially eat…

And in every single case – regardless of whether their deficit is small, moderate or large, or whether they are on a higher or lower calorie diet – they are going to end up losing weight as long as they are consistently in that deficit.

The only question is… which deficit size is best?

For most people, the main (or often, only) consideration here is which deficit size will work the fastest. And that answer comes down to simple math.

The larger the deficit… the faster your rate of weight loss will be.

And that’s how most people end up on a very low calorie diet. They simply want to lose weight fast, and they realize that the less they eat, the faster it’s going to happen.

Therefore, a very low calorie diet is guaranteed to be the best option for anyone who wants the fastest results possible.

On paper, a VLCD diet should produce the fastest weight loss results. But this is rarely what ends up happening in the real world.

In fact, not only do VLCDs not work fast, they often don’t work at all.

How can that be, you ask?

Is it starvation mode?

HA… no. Starvation mode is a myth. A caloric deficit, no matter how large it may be – even if the person is literally starving to death (definitely NOT a recommendation… just making a point) – will still result in weight loss.

Is it metabolic damage?

Nope, because metabolic damage is not a real thing.

Then what the hell is the problem here?

The problem is that the intended (unnecessarily) large deficit doesn’t exist consistently enough to work.

What I mean is, people may attempt to create this large deficit by using a VLCD, but due to how hard and unsustainable a VLCD truly is, it doesn’t happen often enough or last long enough to actually work.

And so, the huge deficit they’re trying to consistently put into place isn’t consistently being put into. Which means weight loss doesn’t happen.

Now you may be wondering, what exactly makes VLCDs so hard and unsustainable?

1. Hunger And Appetite Are At Their Worst

Why does this matter? Because those issues will eventually prevent you from eating the low amount you’re attempting to eat.

The way I usually see it go is like this…

And they may be able to successfully do it… for a day.

Hell, maybe even a couple of days.

And it’s usually to a degree that cancels out whatever unnecessarily large deficit the person successfully managed to create in the day(s) prior, thus preventing any weight loss from happening. 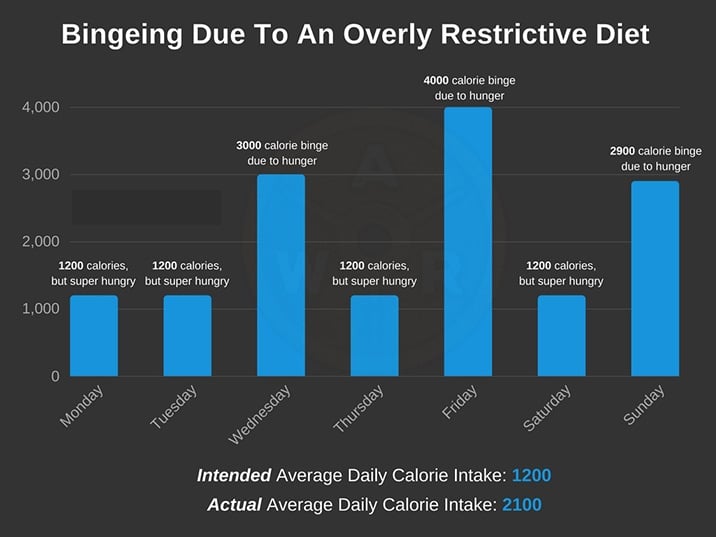 So you know how people will claim to be eating some super low amount (i.e. 500 – 1000 calories a day) but still aren’t losing weight? THIS, right here, is one of the most common reasons why. (The other common reason is unknowingly eating more calories than they think they are due to some type of error, miscalculation or underestimation.)

Even better, imagine that the binge days in this example went even higher in calories. That’s how you get people claiming to be eating some super lower amount but yet are somehow gaining weight.

There’s nothing mysterious involved here. You’re just trying to eat less than you realistically can, and it backfires.

2. Muscle Loss Is At Its Worst

Another big problem with going excessively low in calories is that you lose muscle.

Muscle loss is a potential problem with ANY prolonged caloric deficit, but just like with hunger and appetite, it’s much worse the larger your deficit is.

Not to mention, the insufficient protein intake that often goes along with very low calorie diets makes this problem even worse, as does the fact that strength and performance in the gym (which is another key factor for maintaining muscle) goes to shit when your calorie intake is excessively low.

The result of all of the above? Significant muscle loss.

3. You Know What? Everything Is At Its Worst!

Let me save us both some time here.

You see, your body doesn’t like being in a caloric deficit, nor does it like weight loss in general. In fact, to your body, your fat is actually a good thing to keep around for survival purposes, and survival is all your body truly cares about it.

And by “interesting adaptive responses,” I mean your body fights back against your attempt to lose weight.

How so? By doing everything it can to make the weight loss process so hard that you start eating more and stop being in a deficit.

And guess what else?

While this is true with ANY prolonged caloric deficit, it’s worse – much worse – the larger that deficit is.

Which means, while any weight loss diet is going to be hard to some extent, very low calorie diets are going to be the hardest.

Specifically, damn near every single physiological and psychological aspect of losing weight will be at its worst.

Which is why VLCDs rarely work. And even in those rare cases when they do? Well…

4. You’re Probably Going To Regain The Weight Right After

One of the biggest problems people have with weight loss is maintaining their progress for the long-term. So even when they successfully lose weight, it’s a whole second struggle to then keep it off.

And while regaining the weight is a potential problem for people on EVERY kind of diet, it’s MUCH worse and MUCH more likely to happen for people on very low calorie diets.

And the reason why is obvious.

So even if you are somehow able to stick to your VLCD long enough to reach your weight loss goal, what the hell are you supposed to do once you get there?

How do you maintain your results for the long-term after getting those results using an extreme method that isn’t actually maintainable?

Because instead of learning the fundamentals of proper diet and exercise, and how to adjust things based on your specific needs and preferences, and developing the necessary habits and dietary/behavioral skills required for long-term success, you went with an extreme, short-term, quick-fix method that doesn’t help AT ALL with long-term maintenance.

Contestants on The Biggest Loser have the same problem after the show ends.

So even if you can manage to endure the physical and mental pain of a VLCD long enough for it to actually work, you’re likely to eventually end up right back where you started. Or possibly even worse. And then repeat the cycle over and over again.

5. It’s Not Physically Or Mentally Safe

In addition to very low calorie diets being hard to consistently sustain in the short-term and impossible to sustain in the long-term, it also comes with two other huge potential problems, both of which involve your health and the overall safety of such a diet.

The first involves your physical health. Allow me to quote myself from a previous article (Am I Not Eating Enough Calories?) on the subject…

This is when a person is eating an amount of calories that is so low that they just aren’t able to consume the amount of macronutrients (primarily protein and fat) and micronutrients (various vitamins and minerals) that the human body requires to sustain health, function and potentially even life itself.

In case you may have forgotten, we don’t just eat food because it tastes yummy. We eat it because it contains the things our bodies need to keep us alive and functioning.

Exactly what kind of “bad things” is impossible to say, as it depends on a variety of factors. But if you want an example, just take one look at the long list of problems associated with anorexia.

That’s the perfect place to start.

If you want more examples, pick any specific nutrient you want and look up the common problems associated with a deficiency in that nutrient. Then look up some more. And then more. And then combine it all together.

This is the reality of what can happen on a very low calorie diet.

Now, sure, the person in this scenario will still lose weight if they can manage to keep eating whatever unnecessarily low amount they’re eating (which explains why anorexics reach disturbingly skinny levels), but um… it’s going to take a significant negative toll on your health.

And as that toll becomes more and more significant, it’s going to become harder and harder for the person to continue losing weight as a result of the way-more-important impact it’s having on their ability to sustain health, function, and, if it goes on long enough… life itself.

Our second potential problem involves your mental health in a way that can significantly impact your physical health as well.

And that is the fact that unnecessarily low calorie diets often come with/lead to disordered eating habits (anorexia, bulimia, etc.) and/or various body image issues. And once that happens… the doors are open to all sorts of associated problems.

So Then How Many Calories Should I Eat?

At this point, you should have a pretty good understanding of why VLCDs are a bad idea, and how even though we often think they are what’s going to work the best/fastest, the reality is that they usually don’t end up working at all.

For all of these reasons and more… they should be avoided.

(Note: The main exception here would be in (typically) short-term cases when a doctor prescribes a VLCD to a (typically) obese patient who (typically) has some sort of health issue that warrants an extreme diet measure like this, where it is then used under medically supervised conditions.)

And that brings us to an obvious question: how many calories should you eat to lose weight?

For the vast majority of the population, my answer is this:

How Many Calories Should You Eat?

You should eat the maximum amount of calories possible that still produces a sustainable and healthy rate of weight loss for you.

Full details here: How Many Calories Should You Eat To Lose Weight?